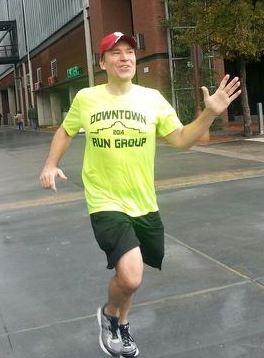 This weekend I ran my first marathon. 26.2 miles. I ran the San Antonio Rock ‘n’ Roll Marathon route with my friend and training partner/coach, Todd. I ran the route on Saturday because the race itself is on a Sunday in two weeks. This year’s Rock n Roll will be Todd’s 12th marathon! He’s amazing.

Most marathons are scheduled on Sunday mornings. I choose not to run on Sundays. Mostly, because I’m a pastor and I have other priorities. But I also favor the principled Eric Liddell, the sprinter who grew up in a missionary family in the early 1900’s. He and his family respected and honored the command to keep the Sabbath day set apart for God. It was always a special day for their family. They went to church together and spent time together. As a family.

Liddell’s story is legendary. He was one of the fastest 100 yard sprinters in the world going into the 1924 Paris Olympics. But he made the difficult choice of not running the 100 at the Olympics because it was scheduled on Sunday. So, with a team-mate’s suggestion, he switched to the 400, which was run on Thursday. He won the 400 on Thursday and a Jewish friend and competitor won the 100 on Sunday. His story is captured in the Oscar winning film “Chariots of Fire.”

So, in honor to God and in the spirit of Eric Liddell, I have personally decided not to run races on Sundays.  If you run races on Sundays, that’s your call. My hope, however, is that you get a Sabbath-type day of rest at least once a week where you spend it with people you love.

What do you do if you if you want to run in your town’s premier marathon?  Well, you can do what I did. I joined a free running club. This one is called the Downtown Run Group and is championed by a retired man and his wife, Bo and Pat, who have the incredible gift of encouragement. He is also an elder at our church. We meet every Saturday morning at The Pearl, an old brewery in San Antonio that has undergone a recent transformation and is now an urban center. Some mornings there have been over 100 runners. Some are seasoned marathoners. Some are first timers like me. Most will run the half-marathon in two weeks. Yet Bo respected my position and encouraged me to run my individual race on Saturday. He’s famous for saying, “It’s not a big deal. But it IS a big deal!”

A little background: In 1994, I ran a 5K run sponsored by our neighborhood YMCA in Cincinnati. Afterwards, someone asked if I’d ever like to run a full marathon. I thought about it and said, like many other people, “Yes! Someday, I’d like to run a marathon.”  I ran my first half marathon last year (a Saturday event) and decided to run the full marathon this year. I’ve had some great running companions during those 6 a.m. runs. It was an encouragement to me as I began training in August to accomplish this 20 year goal of running a marathon.

The actual run on Saturday was pretty good. The weather was a perfect 54 degrees and it was misting at the start. There was a steady rain for much of the 6 hour run. My head was clear and my body mostly cooperated… until we hit the 21 mile mark. That’s when it became really challenging. We were running a 3:1 interval. That means we ran for three minutes and walked for one minute the whole race. Miles 21 through the end I couldn’t wait for the beeper to go off. “I’ll take that walk break!” I exclaimed often.

When we turned the corner at The Pearl and headed for the finish line 100 yards away, we were surprised to see a handful of friends and family cheering us on. My wife Linda even took off work to make sure I saw her smiling face at the Finish. We whooped and hollered and celebrated those final steps! What an incredible feeling!

And thanks to Todd, I got an unexpected prize medal inscribed with the Scripture noted above.

But as the author of Corinthians states, the true crown of victory every believer earns, will last for all eternity! It’s an amazing principle of God’s economy.

Will I do it again! You betcha!

Our Downtown Run Group says to each of us “Run inspired!” Run with purpose. So, whether you run marathons or bake cookies with your kids or manage millions of dollars in assets or create beautiful art or wait on tables or care for the sick, do it to win the prize.

And God says to the believer, “Here’s a prize that will last for all eternity! Life!”

6 thoughts on “So, I ran my first marathon Saturday…”